Catalogue entry no. 14 by Susan Anderson:

A baker by trade and a self-taught draftsman by leisure, Johannes Bronckhorst produced fine watercolors of ornithological and zoological subjects. Although he trained as a pastry chef in Haarlem, Bronckhorst set up shop in 1670 in the northern port city of Hoorn. The Dutch East India Company ships that docked in Hoorn’s harbor brought countless curiosities from around the globe, including natural history specimens. Bronckhorst was among a small group of artists who depicted these rare and beautiful treasures.

In this sheet, Bronckhorst portrayed two birds from far-flung points in the former Dutch East Indies now comprising the Indonesian archipelago. On the left is a Little Spiderhunter (Arachnothera longirostra, subspecies nisus [?]), indigenous to Nias Island, part of the Greater Sunda Islands off the west coast of Sumatra. At the right is a Buru Paradise-Kingfisher (Tanysiptera galatea acis), known only on Buru Island, which is immediately to the west of the settlement of Ambon in the Molucca Islands. Ambon, located in the east, served as a hub for the spice trade pursued by the Portuguese and later by the Dutch, whereas Nias Island is located on Indonesia’s westernmost margins, closer to the Indian Ocean. Bronckhorst’s drawings are so detailed that each bird is easily recognized, and in many cases, including here, the works predate written taxonomic studies by roughly a century.1

In addition to their scientific importance, Bronckhorst’s ornithological watercolors stand as artistic compositions. He frequently perched his birds on tree branches within minimal landscapes, and although he worked from preserved specimens by necessity, he depicted the birds in dynamic postures—both characteristics being precursors to Aert Schouman’s watercolors of birds from the mid-eighteenth century (see 1985.196). Here, the elegant, curving tail of the kingfisher continues its arc through the cocked head and slightly open beak, and its vibrant blue plumage provides eye-catching visual contrast to the smaller and modestly colored spiderhunter. Both specimens are repeated almost exactly in a watercolor by Bronckhorst’s amateur student, Herman Henstenburgh (1667–1726), also a baker and chef in Hoorn. The kingfisher appears in mirror image and the spiderhunter opens its beak to catch a flying insect; a King Bird of Paradise (Cicinnurius regius) accompanies them at the right (Fig. 1).2 Henstenburgh again depicted these two birds in very similar poses in two other sheets, the kingfisher perched alone in a drawing in Florence, and the open-beaked spiderhunter positioned underneath the King Bird of Paradise on a more pictorial sheet in the collection of Clement C. Moore, New York.3 Although the student may have copied from the master, more likely each artist drew from the same preserved specimens. Among the various depictions of each bird, slight differences in color and minor details in plumage suggest that artistic interpretation did play a small role in these documentary—yet aesthetically pleasing—works. Along with other prominent natural history draftsmen of their time, Bronckhorst and Henstenburgh are known to have drawn, on commission, from Dutch art collector–horticulturalist Agneta Block’s collection of flora and fauna during the last decades of the seventeenth century4 (see 1999.169). 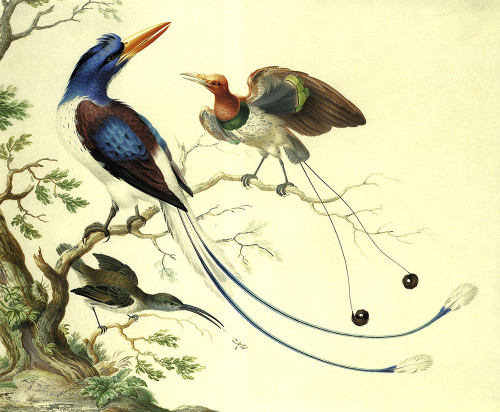 The Draughtsman at Work. Drawing in the Golden Century of Dutch Art, checklist (unpublished, 1980), no. 26