Catalogue entry no. 80 by Susan Anderson:

After a lifetime of producing Italianate and Dutch landscapes, topographical and architectural views, and genre scenes, Herman Saftleven turned to lush watercolors of botanical subjects. From the artist’s corpus of over 300 paintings, 1,400 drawings, and 40 etchings, Wolfgang Schulz catalogued 27 of these sheets, all executed between 1680 and 1684, ending several months before Saftleven’s death on January 5, 1685.2 The subject here, Lychnis coronaria —also known by the common names rose campion, dusty miller, and mullein pink—has been cultivated in Europe for centuries and is indigenous to the rocky hillsides of southern Europe, the Middle East, and North Africa.3 Another Saftleven watercolor of this genus bears his monogram and the date of July 7, 1682.4 Three others of varying subjects are known from 1680, the year of Harvard’s sheet: a rose with a bloom and two buds, known to Schulz;5 a rose with wide bloom and bud, appearing in the London trade in 1983;6 and another mullein pink, also from the Marqusee collection, in the New York trade in 2007 (Fig. 1).7

Saftleven often dated the watercolors he produced between 1682 and 1684 with the year, day, and month, all from spring and summer, indicating that he drew seasonally, and directly from blooming specimens. All drawings from this time period are on sheets of about 350 × 250 mm. The four known from 1680, however, bear no further dating and are on smaller paper, 200 × 157 mm; their simpler inscriptions and more modest format suggest that they were Saftleven’s initial forays into this new subject matter. The inscription identifying the species on the former mount of our drawing, while no longer extant, was consistent with taxonomic and descriptive Latin inscriptions applied around 1700 to many versos of Saftleven’s botanical studies.8

The amateur naturalist Agneta Block (1629–1704) likely commissioned Saftleven to depict specimens from her renowned gardens.9 Several months after the death of her first husband in 1670, Block purchased a country estate, Vijverhof, located along the Vecht river near Nieuwersluis. When not in her Amsterdam home, Block transformed Vijverhof with her talent for cultivating exotic plant specimens and her enthusiastic collecting of books, rarities, birds, and insects. She moved there permanently after the death of her second husband in 1694. In addition to Saftleven, Block commissioned other artists to draw from her collection of flora and fauna, including Otto Marseus van Schriek; Pieter Holsteyn II; Pieter and Alida Withoos; Willem de Heer (1678); Johannes Bronckhorst (1692, 2013.171); Rochus van Veen; and Maria Sibylla Merian (1696) and her daughter, Johanna Helena Herolt (1697).10 Saftleven and his pictorial watercolors appear to have held the premier position among this group, as he was singled out in a poem about Vijverhof in 1702: “Saftleven lives on here, through his artful style, so delicate and lively, on canvas and paper.”11

1 (This note refers to the provenance.) The early history of Saftleven’s botanical drawings remains ill defined, although it is likely that the drawings he did for Agneta Block, presumably including our sheet, remained together within only a few collections until about 1800. According to Valerius Röver’s posthumous inventory of 1739, he owned four portfolios (nos. 28–31) of watercolors by Vijverhof artists, including one, portfolio 30, dedicated solely to ninety-two of Saftleven’s botanical sheets—far more than are known today. Our drawing does not bear Röver’s mark, suggesting that Block’s heirs sold it to another source, probably Samuel van Huls, in whose sale two albums of Vijverhof artists appeared (14 May 1736, as lot 3882). These albums probably contained the same sheets that appeared in the 1771 estate sale of Jan Bisschop (not to be confused with the artist of a similar name), in which the works passed to only three hands: H. van den Bergh, D. de Jongh, and Fouquet. The drawings purchased by the first two remained in their families and were sold by their heirs in 1786 and 1810, respectively. As Schulz discussed in his article on Saftleven’s botanical drawings (Wolfgang Schulz, “Blumenzeichnungen von Herman Saftleven d. J,” Zeitschrift für Kunstgeschichte, vol. 40, no. 2, 1977: 135–53), lot descriptions remain vague enough throughout to preclude certainty, although the trail is warm enough to warrant serious consideration. 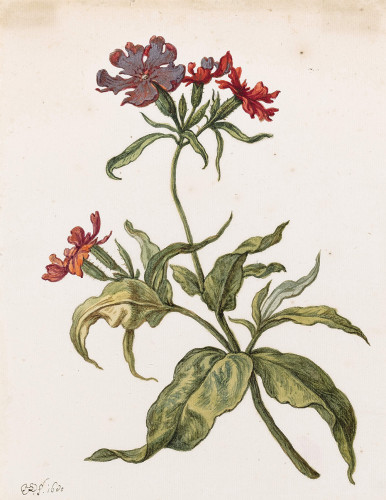 The Draughtsman at Work. Drawing in the Golden Century of Dutch Art, checklist (unpublished, 1980), no. 21