Catalogue entry no. 82 by Susan Anderson:

Dordrecht native Aert Schouman, a man of many talents, led a prolific and varied career. His watercolors and paintings range from portraits and historical subjects to botanical and zoological sheets (especially birds) to finished copies after admired works of the Golden Age. He created site-specific, decorative wall panels, which were especially in vogue during the eighteenth century, and he painted and etched glass—skills he learned from his friend Frans Greenwood (1680–1763). He undertook a lengthy, eight-year apprenticeship with the painter Adriaan van der Burg (1693–1733) and set up residence in the Hague in 1748. Schouman made frequent trips to Dordrecht, as well as visits to other cities within the United Provinces, Kassel (1753), and England (1765–66 and 1775), as we know from his frequently dated topographical drawings. Not only a prolific artist, Schouman was an active teacher, both privately and within the context of the drawing society Pictura, in both the Hague and Dordrecht. Like many of his fellow artists, he participated in the art trade as both collector and dealer.1 Within the medium of watercolor, especially, Schouman brought traditionally scientific subjects into the arena of aesthetic and picturesque representation.

Schouman’s botanical drawings—in contrast to his more popular portrayals of birds and topographical views—remain little recognized or studied. Of the 268 drawings of plants listed in his estate auction, only a fraction of the total are known today.2 Ranging in species from the exotic to the mundane, Schouman’s flora, like his fauna, stand proudly at the foreground of a spare landscape often marked by a distant village or harbor, and frequently in an improper habitat. Many of his surviving botanical drawings show a finished stem, indicating that they were originally drawn as specimens against a blank background over which Schouman subsequently drew, applying a few rocks at the base. Study of a Lupine, with its painterly application of watercolor and fanciful, solitary placement on a riverbank, illustrates this transformation from scientific specimen into artistic object. His inscription on the verso—translated as “large blue lupine”—confirms his ultimately aesthetic goals, as it is probably meant as a description rather than a scientific name. (The preferred scientific designation was formerly Lupinus caeruleus but is currently Lupinus formosus, variant robustus.)3

One other lupine drawing by Schouman is known; it was sold at Christie’s, Amsterdam, in 1981 (Fig. 1).4 Even though the species is recognizable in both works, Schouman composed the Christie’s drawing with a central full, sweeping stalk and a strongly horizontal background, but he balanced the Harvard lupine’s weighty, left-hand branches and angular pods with a sailboat at the right.

3 Thanks to Ray Angelo, associate of the Harvard University Herbarium and former curator of vascular plants, New England Botanical Club, for his assistance in identifying this plant. 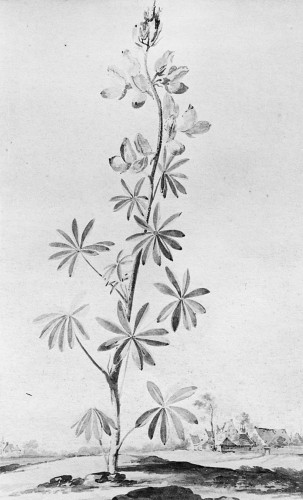 Credit Line
Harvard Art Museums/Fogg Museum, Gift of Maida and George S. Abrams in appreciation of Professor John Rosenfield's many contributions to the Fogg Museum while serving as its Director (1983-85)
Accession Year
1985
Object Number
1985.196
Division
European and American Art
Contact
am_europeanamerican@harvard.edu
The Harvard Art Museums encourage the use of images found on this website for personal, noncommercial use, including educational and scholarly purposes. To request a higher resolution file of this image, please submit an online request.