What constitutes home? Here, curatorial colleagues across divisions share examples of works of art that address domesticity. This is the first in a series of articles designed to explore the Harvard Art Museums collections through a particular lens or theme.

In the works highlighted here, home is never an empty space. Whether the artists made their home in France, Ireland, Iran, Germany, ancient Greece, or Late Antique Egypt, they focused on people and their day-to-day activities. In keeping with social mores that prevailed over millennia, women and young children are the chief protagonists, and accoutrements such as pots and pans, a broom, a loom, a grinder, and containers of household cleaners point to chores and occupations traditionally associated with women. Some of the works themselves are utilitarian objects, such as a water jar or a fragment of a textile woven with auspicious symbols. Even if well-worn, stained, or tattered, the objects—and the images that depict them—speak to the comforts of home.

These domestic scenes are intimate without conveying isolation. In a French print, a window opens onto nature, and the viewer is positioned as if entering the room. An Iranian pen box with vignettes of a woman writing and reading refers to its own function as well as the sense of connection that can be achieved through the written word. Painted around the same time, in the mid-19th century, a pair of Irish renderings of a cluttered desk celebrate the connective power not just of the word, but also of the image: the medium of watercolor brings glimpses of the wider world into the artist’s home and at the same time allows the artist to share his view of the world (and home) with others.

The French print of a kitchen interior pictured above reproduces a painting by Martin Drölling (now in the Musée du Louvre, in Paris) that was exhibited to much acclaim at the Salon of 1817. The lighting and subject matter emulate 17th-century Dutch painting, which was extremely popular at the time. Art critics derided this mode of painting as pastiche, but in the wake of the political upheaval that returned the Bourbon monarchy to power, many collectors clamored to have these kinds of reassuring, familiar images in their homes. A mother and her daughter are engaged in “good” work, sewing, while another child plays peacefully on the floor with the family’s cat. The mother gazes warmly and invitingly out at the viewer, who is positioned in the kitchen as a welcome guest, perhaps even the patriarch of the family. Though the setting is rustic and humble, everyone appears content in the warmth of the family abode.

Home Is Where the Loom Is

Pottery made in fifth-century BCE Athens featured figures, with few, if any, architectural or landscape elements. This water jar depicts a domestic scene: a seated woman hands her baby boy to a nursemaid. The woman’s chair and a tall loom are the only furnishings. Holding on to his walking stick, the husband looks on from the sidelines. Home is defined by the women who spend their time there, occupied with child-rearing and weaving. Men’s main activities take place outside the home. Nurses were essential members of the households that could afford them; as indicated by the sleeved garment of the nursemaid here, they often were slaves of foreign origin. The mood of this scene is calm—this is not a snapshot of everyday life, but a timeless view of an ideal Greek household. As such, it could serve to commemorate a woman as a wife, mother, and industrious homemaker. It seems the jar accompanied a burial in a cemetery near Athens. As we glance at it some 2,500 years later, it reminds us that home is comprised of people, relationships, and responsibilities.

A beat-up food grinder with a red handle sits atop a blue-and-white checkered tablecloth with drab wallpaper in the background. An open container of cleanser shines brightly in the same setting. In these large-scale color photographs, a household object appears as if the subject of a studio portrait or, perhaps, the lead image of an ad campaign gone awry—one that features the old and worn rather than the shiny and new. Both images stem from a vast archive by Ulrich Wüst (b. 1949), one of the most notable photographers in the former German Democratic Republic and still active today.

While best known for his street photography, Wüst here turns his camera on the private sphere, photographing the contents of a farmhouse he purchased after German reunification (when many citizens in the GDR left for the West). Wüst’s subject is thus deeply personal, revealing the past life of his home via the everyday things abandoned by previous inhabitants in the socialist state. No aspect of this inheritance is inconsequential for Wüst. He carefully documents the contents of the house both singly and in groups and also arranges the resulting photographs in leporellos (accordion-style books), as seen in his Hausbuch (House Book). Similar motifs such as kitchen utensils, handbags, or shoes often appear in a grid—a nod to the project’s conceptual origins. The domestic object here is more than just an East German gloss on Western pop art. It is a reflection of the self and (our)selves.

For more than 15 centuries, the dry sands of Egypt preserved this colorful woven looped textile, once part of a cushion cover, blanket, or wall hanging that would have warmed an Egyptian home in the fourth or fifth century. In the center sits a plump quail with smiling eyes. Running rabbits inhabit roundels in the upper right and lower left corners while charging lions occupy the opposing spaces. Between the roundels are four green urns sprouting grape vines and tendrils. Do you see the vine with pink grapes instead of red ones? The all-over decorative patterns of plant and wildlife were common design elements that were popular over the centuries from the Greco-Roman period into early Islamic times. They often symbolized traits or qualities that owners aspired to. Rabbits and flowering vines were symbols of fertility and abundance, while lions represented strength and control. Quail, with their soothing sounds and colored feathers, were popular pets throughout the Mediterranean. When this textile was new, the dark color of the quail and the vines, which was derived from indigo, would have been more prominent; it is remarkable that the green, yellow, and red have remained so vibrant.

Vignettes painted within cartouches on this pen box showcase the quiet pleasures and engrossing power of the written word, as enjoyed in a domestic setting. To be sure, all pen boxes underscore the importance of literacy, for they were fashioned to hold writing implements, such as reed pens, pen knives, paper scissors, and inkpots. The decoration on this box, however, takes us a step further. In three vignettes, the artist Mubarak Mirza ibn Mahmud, a prince of the Qajar dynasty in Iran, has depicted a splendidly dressed young woman reading and writing in a luxuriously appointed interior. She is likely composing a letter in one scene, which also shows a pen box partially open at her feet, its inkpot at the ready to recharge her pen. In two scenes, books command her attention; the minute text on the open pages are verses by the 13th-century Persian poet Jalal al-Din Rumi. By engaging in the written word even in seclusion, she keeps in communion and communication with a larger world.

Life on a Tabletop

Plenty of us can identify with cluttered tables—especially now that we’re all sequestered—but how many can claim that the objects on our tabletops adhere to the rules of perspective? In his charming watercolors, J. E. Newman laid out the compositions according to the scale at the top of each sheet, with a labeled “point of sight” at the upper right. We don’t know much about the artist, who cleverly incorporated his name and address (Philipsburgh Avenue, Dublin) into both renderings: as the author of the watercolor test sheet in the first work, and as the recipient of a note in the second. In Perspective Rendering of Artist’s Table, Newman presents himself as an accomplished watercolorist. Two of his “works” are within reach of a wooden box containing pans of watercolor. Brushes, a pencil, and dishes for mixing colors are also nearby. Newman’s minuscule handwriting allows us to read the stanzas in the book at the top left, which is open to Robert Bloomfield’s popular poem “The Farmer’s Boy” (1800). Below the engraved vignette, the text begins: “O come, blest Spirit! Whatsoe’er thou art, / Thou rushing warmth that hover’st round my heart.” 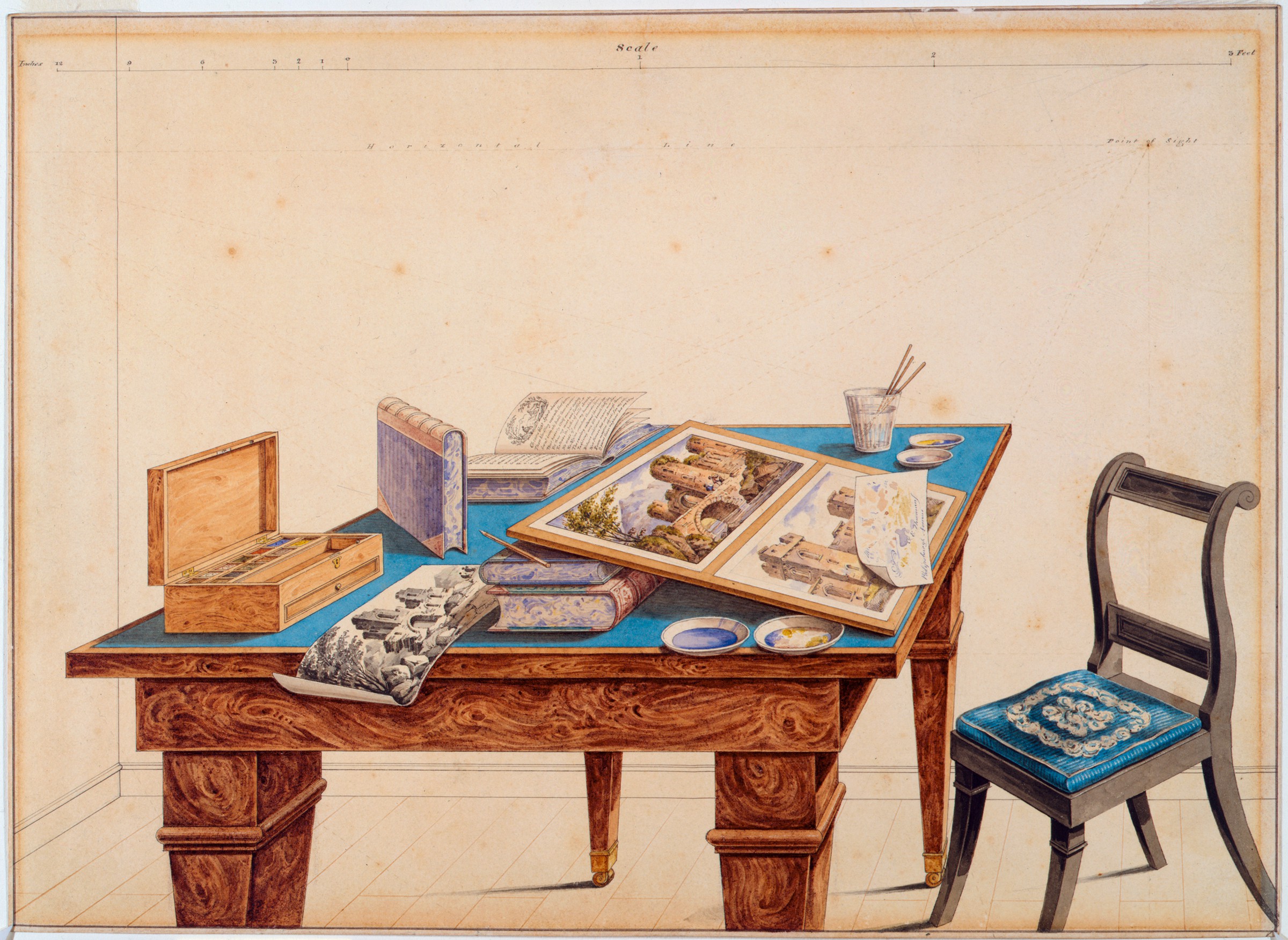 The same table is a repository for the artist’s personal effects in Perspective Rendering of a Desktop. On the folding portable writing desk, an envelope lies ready for an unfinished letter, while a ribboned stack of envelopes signals an active correspondence. The open book here is turned to a page featuring Bloomfield’s 1802 poem “Richard and Kate; or Fair Day, a Suffolk Ballad,” published in Rural Tales, Ballads, and Songs. In it, Richard persuades Kate, his wife of 40 years, to accompany him to the fair, for

[t]hrough all my days I’ve labour’d hard,
And could of pain and crosses tell;
But this is labour’s great reward,
To meet ye thus and see ye well. 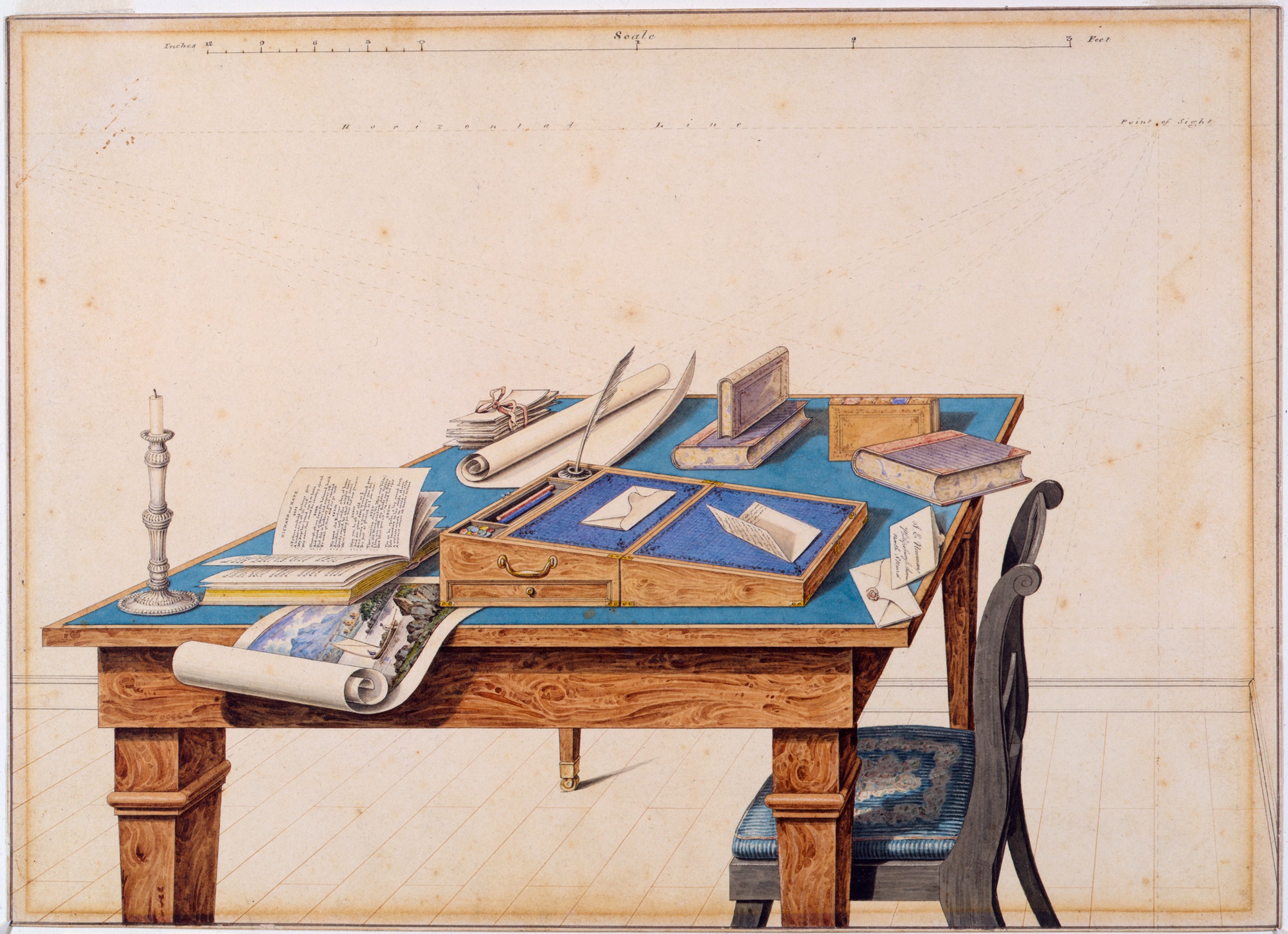 In these two watercolors, the artist seems to be sending us messages from the past, invoking poetry, familial love, and romantic landscapes, and allowing us to dream of finding closeness near and far.

Miriam Stewart, Curator of the Collection, Division of European and American Art